I volunteered to cook for the Texas Veg Fest Friday night and it gave me the opportunity to work with two of the best-known vegan cookbook authors around, Terry Hope Romero and Isa Chandra Moskowitz. I helped make seitan tamales! I made the tomato-chile sauce and I assembled a lot of the tamales. I worked mostly with Terry and she was super cool. Good times. 🙂 I heard about this opportunity from Molly from The Lone Star Plate blog. We met outside Conscious Cravings near UT Austin – how cool is that?

We cooked in an East Austin commercial kitchen along side vegan baker Kristen from Capitol City Bakery (available at the soon-to-open Counter Culture brick-and-mortar location) and Lou (graduate of The Natural Epicurean) and Serafina from gluten-free bakery True Nature’s Child (I wrote about them in one of my first blog posts). Celeste’s Best cookie dough was being made and Sue from Counter Culture was there, too. Everyone was super cool. Apparently there is a tortilla business that operates in the same kitchen, as well. Who knew?

Below: Me with Terry Hope Romero, author of Veganomicon and Vegan Cupcakes Take Over the World. 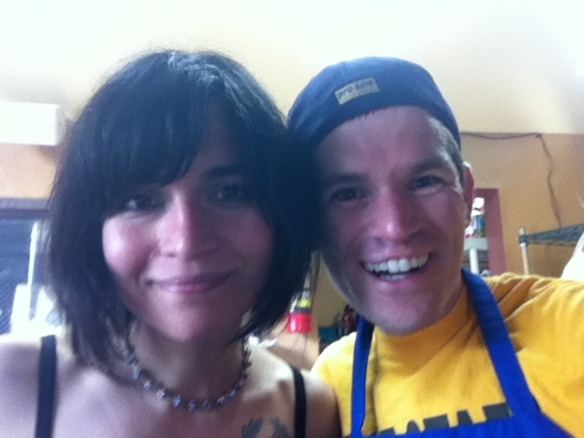 Below: Lotsa seitan being cooked. It would end up in the tamales we made. Seitan is pure wheat gluten, which means I couldn’t eat it. Ha! It’s chewy and meaty, however, so a lot of people who don’t eat meat really like it.