Kinpira is pretty much a saute in macrobiotics. It involves thinly cutting a variety of vegetables and cooking them in hot oil. The standard kinpira combination is using burdock, also known as gobo, and carrot. The resulting dish is a bit oily, crunchy, and sweet (especially if you use parsnips). So what’s not to love about that? Just don’t overdo it – kinpira has a lot of energy (the non-macrobiotic term would be lots of calories).

Below: Who remembers Fraggle Rock the TV show on HBO? I sure do! Gobo, in addition to being a root vegetable, was also the name of this character on the show, which was produced by Jim Henson. Ahhh, the 1980s.

Since kinpira is similar to a braise technique (saute + simmer), it’s energy is grounding and steady. Kinpira is said to impart strength to the eater. Further, kinpira is made with root vegetables, which are also settling and grounding. This would be a good thing for someone with an overly yin condition since kinpira is generally yang in nature. It’s a good dish for colder weather since root vegetables are in season in cooler weather.

Below: Some actual gobo (or burdock). Unrelated and untrue side note: I am considering becoming a hand model in my spare time.

Below: Kinpira can be made with lotus root, the white things with the holes in them. That is NOT Swiss cheese :). 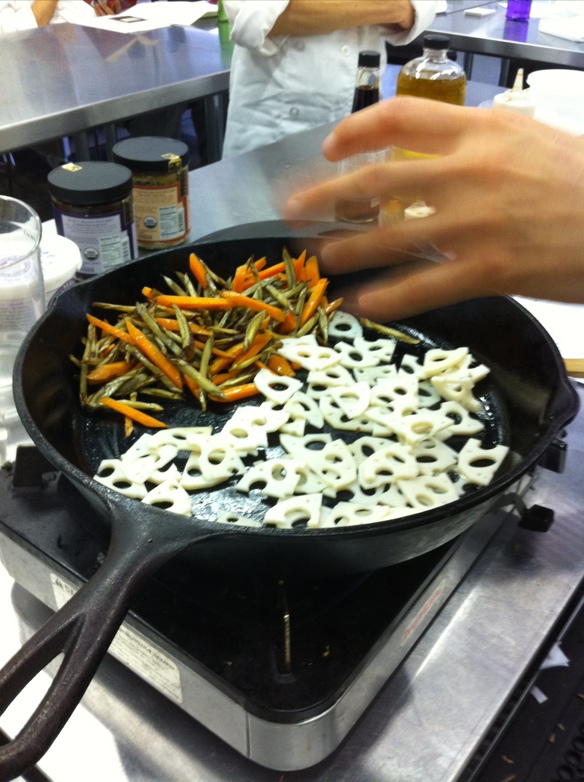 Below: Chef Rachel Zierzow making a kinpira with carrot, sunchokes, and parsnips. She added some warming cinnamon and other spices to this dish, which was deliciously sweet although it had no sweeteners added.

To counterbalance the grounding/inward energy of the kinpira, Chef Rachel paired it with blanched greens and millet, both of which have more yin, or rising/outward, energy. The kinpira all had sweetness because of the root vegetables and millet has sweetness, as well. Subtle sweetness is a predominant flavor in macrobiotics because of the well-cooked grains and use of sweet vegetables such as carrots and kabocha squash. However, the sweetness is not extreme as it is in Western diets.

Below: A nice macrobiotic plate of three types of kinpira, greens, and millet.